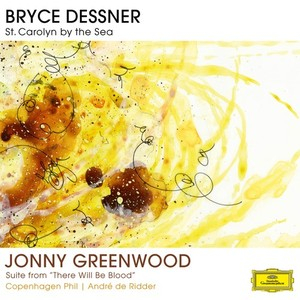 Popular musicians who have crossed over to classical composition have been, if not exactly commonplace, at least regular in their appearance on the scene. Those from the sphere of alternative rock, with its origins in the enforced simplicity of punk, are more unusual, but the two composers here, guitarists Bryce Dessner of the band the National and Jonny Greenwood of Radiohead, both have used orchestral textures and elements of what used to be called art-rock in their work, and this Deutsche Grammophon release is not the first classical outing for either of them. The work of both composers is absorbing. The Greenwood pieces, excerpts from the score to a film called There Will Be Blood, have even been recorded before. They are quite suggestive even for those who have not seen the film involved. More original, perhaps, are the three pieces by Dessner, who has a master's degree in music from Yale University. Quite different one from another, they employ large color fields with long passages of stasis punctuated in two of the three works by electric guitar. This rock element is handled in an entirely novel way. The sustained energy of the Copenhagen Philharmonic under André de Ridder, a group probably unfamiliar with the music before beginning the project, is a plus, as is the clarity of the sound environment and design from the Royal Danish Academy of Music. Definitely recommended for those interested in ambitious experiments from the rock sphere.